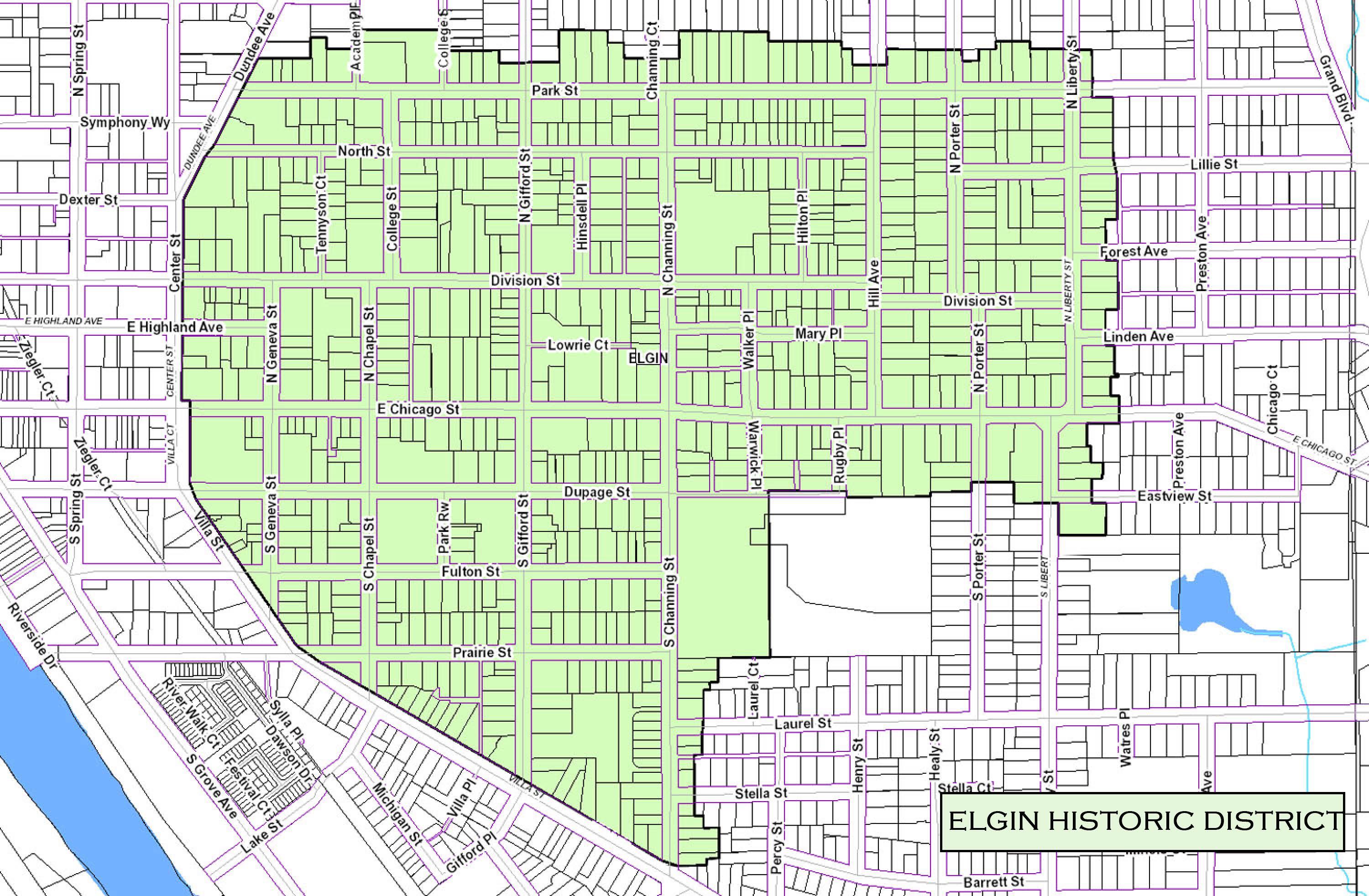 The Elgin Historic District contains part of the original plat of Elgin that was laid out in 1842 by James Gifford. Land within the district was completely platted by 1859 with streets laid out in a modified grid pattern.

The Elgin Historic District contains an excellent collection of late 19th and early 20th century residential architecture. Located to the east of the downtown area, lots were platted as early as the 1840s. Construction within this area was limited until after the Civil War. Many of the dwellings were erected during the boom years of the 1880s and 1890s, when Elgin prospered as a result of the growth of the Elgin National Watch Company. Between 1879 and 1891, this company grew from 840 to more than 3,000 employees. Many of the company's foremen and managers built large, two-story frame dwellings along the streets in the neighborhood. By 1892, more than 400 buildings had been constructed within the present boundaries of the historic district.

Urbanization at the Turn of the Century

In addition to the homes for the city's middle and upper-class residents, the district was also the home to many of the factory workers and their families. A number of multi-family brick apartment buildings or flats were constructed in the district in the 1880s and 1890s. Most of these were built along East Chicago and other streets in the western section of the district. These brick buildings are illustrative of the rapidly urbanizing character of Elgin at the turn of the century.

The west section of the historic district also became the home of several of the city's most prominent churches. At the northwest corner of Gifford and Fulton Street is St. Mary's Church, constructed between 1896 and 1899 in the gothic revival style. When it was built, this was the most costly church constructed in Elgin. Another prominent church in the district is the Universalist Church at the corner of Villa and DuPage Sts. This brick church was completed in 1892 and was designed to resemble, from above, a pocket watch enclosed in a case. This church was listed on the national register in 1980.

Gifford Park is the city's first public park and it was laid out by James Gifford in his 1844 addition. The park was later enlarged in the 1850s. The park has been an amenity in the district since the mid-19th century and it was landscaped and equipped as a playing area in 1980.

In the early 1850s, the dream of building a school became a reality as a board of trustees laid the foundations for an academy in 1848. This building was completed in 1855 through 1856 and became known as Old Main. The three-story brick building was designed in the greek revival style with a large portico on the primary facade and a bell tower at the roof line.

The building was damaged by fire in 1911 and the upper floor rebuilt. The building was used as a school until 1969, and in 1976 a fund drive to restore the building was initiated. Much of the building's original appearance was restored including the original roof form and bell tower. In 1987, the building opened as a museum operated by the Elgin Area Historical Society.

Although much of the Elgin Historic District was developed by 1900, construction continued well into the early 20th century. Architectural forms such as american foursquare and bungalow dwellings were constructed in these years and by 1930, few vacant lots remained in the area. In recent decades demolition and new construction has been limited on most blocks and the district contains a remarkably homogeneous collection of 19th and early 20th century dwellings.

The significance of this area was recognized in 1983 when it was listed on the National Register of Historic Places. Many of the dwellings within the district have been well maintained and there is renewed interest in preserving the district's architectural character.